If your Facebook app keeps crashing on Android, don’t worry, in this article today I will share 7 easy solutions to fix the Facebook app crash issue.

This problem is in both the Facebook app and Messenger app, and it is not a sudden problem, some users face this problem every day.

So let’s try to solve those problems, Which many users face daily.

And one of those issues is the Facebook app crashing on Android unexpectedly, and the exact cause of the problems is difficult to figure out.

Facebook is similar to other apps, in which errors come and crash many times.

If the Facebook app is crashing on your Android device, and you want to solve it, then you’ve come to the right place.

Today in this article, I will give Ten solutions to solve the Facebook app crash problem, so that you will be able to solve this problem.

Why does my Facebook app keep crashing on Android?

This is often due to new system updates in our Android phones, as upgrading to the new OS version often causes many problems, which the mobile company fixes in the next upcoming update.

And we are not saying that this happens in every system update, but some system updates cause this kind of problem.

Here, we listed the solutions, in the hope that you could solve this problem easily. I have given you 9 solutions to fix Facebook app below. let’s get started.

FIRST – Update your Facebook app from the Google Play Store

If your phone has automatic update enabled, but if you have disabled it by mistake, you can also do a manual update from the steps below.

If you use Facebook-related apps like Messenger and other supporting apps created by Facebook, then make sure that all these apps are up to date on the latest version.

SECOND – Check For Updates on Android

Because some crashes appear after major software updates, so as to resolve any issues, developers soon resolve issues with small fixes.

How to check for updates on Android?

Clearing the cache of any application is also useful for many users.

Because without erasing any important data from it, you can clear the cache by deleting temporary files, thereby resolving the issue.

The steps given below are according to the Realme smartphone, there may be a difference in some settings in your device: 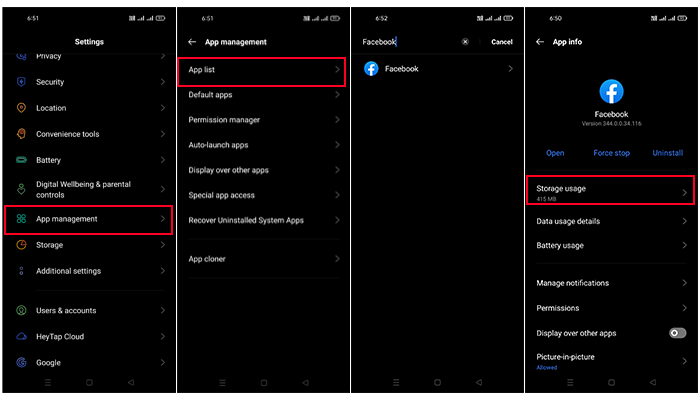 If your problem is not solved by clearing the cache, then you have to clear the data of the Facebook app.

Clearing the data is different from clearing the cache because it will delete the login details from your app meaning that the logs will be logged out of the app as well as the app settings will also be deleted.

Clearing the data helps to delete everything in the Facebook application.

The steps given below are according to the Realme smartphone, there may be a difference in some settings in your device:

If sudden crashes still occur in your Facebook app, you can see the next step.

You can delete the installed Facebook app on your device and reinstall the Facebook app. Because with the restore you will get to see the latest versions which will come with clean cache/data.

However, after the restoration is complete, you will need to re-enter your login details.

If you have updated or uninstalled your Facebook app, your problem still does not get fixed, you can use the old Facebook app versions.

Follow the steps given below to reset your device to factory settings.

Still not working? Then use the alternative wrapper application

Are you also having this problem: Facebook Keeps logging Me Out Error? KNOW HOW TO FIX IT!

Facebook app crashes are a common occurrence, but they don’t have to be. If you know the right tricks for troubleshooting your crashing issue, you can get back up and running in no time! Here are some of our favorite fixes for getting rid of that pesky Facebook App Keeps Crashing problem.

I have shown you seven easy ways to solve the Facebook app crash problem, I hope I have solved your problem.

Thank you for reading this article till the end, if there is any query related to this guide, then comment in the comment section.